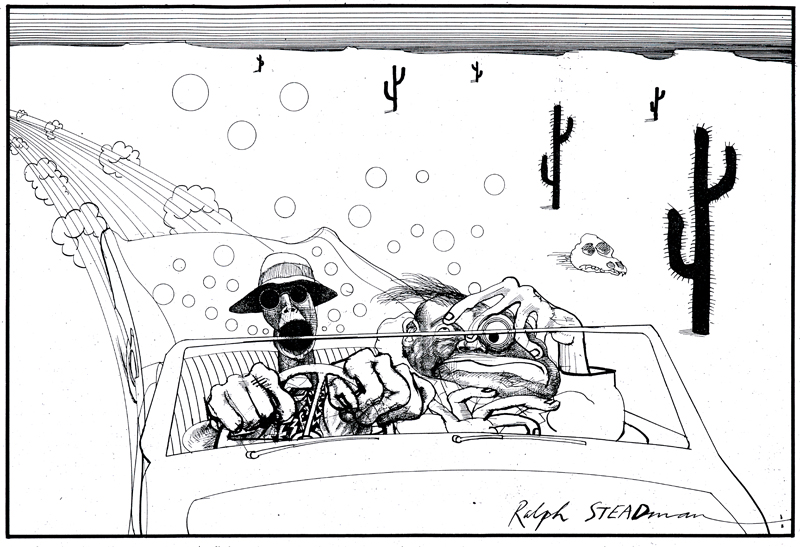 Strange memories on this nervous night in Las Vegas. Five years later? Six? It seems like a lifetime, or at least a Main Era--the kind of peak that never comes again. San Francisco in the middle sixties was a very special time and place to be a part of. Maybe it meant something. Maybe not, in the long run . . . but no explanation, no mix of words or music or memories can touch that sense of knowing that you were there and alive in that corner of time and the world. Whatever it meant. . . .

History is hard to know, because of all the hired bullshit, but even without being sure of "history" it seems entirely reasonable to think that every now and then the energy of a whole generation comes to a head in a long fine flash, for reasons that nobody really understands at the time--and which never explain, in restrospect, what actually happened.

My central memory of that time seems to hang on one or five or maybe forty nights--or very early mornings--when I left the Fillmore half-crazy and, instead of going home, aimed the big 650 Lightning across the Bay Bridge at a hundred miles an hour wearing L. L. Beans shorts and a Butte sheepherder's jacket . . . booming through the Treasure Island tunnel at the lights of Oakland and Berkeley and Richmond, not quite sure which turn-off to take when I got to the other end (always stalling at the toll-gate, too twisted to find neutral while I fumbled for change) . . . but being absolutely certain that no matter which way I went I would to a place where people were just as high and wild as I was: No doubt at all about that. . . .

There was madness in any direction, at any hour. If not across the Bay, then up the Golden Date or down 101 to Los Altos or La Honda. . . . You could strike sparks anywhere. There was a fantastic universal sense that whatever we were doing was right, that we were winning. . . .

And that, I think, was the handle--that sense of inevitable victory over the forces of Old and Evil. Not in any mean or military sense; we didn't need that. Our enery would simply prevail. There was no point in fighting--on our side or theirs. We had all the momentum; we were riding the crest of a high and beautiful wave. . . .

So now, less than five years later, you can go up on a steep hill in Las Vegas and look west, and with the right kind of eyes you can almost see the high-water mark--that place where the wave finally broke and rolled back.